Today is too early to tell, given the short life of both. CERPIs have barely two years investing globally and are barely in the investment phase. The CKDs, for their part, only invest in Mexico and only two have expired.

Although both instruments were issued in Mexico, it is very likely that the CERPIs present results in dollars to their investors, while the CKDs do so in pesos. However, the AFOREs will record the returns in pesos for the purpose of their portfolios. The IRR in dollars or pesos must be indifferent as long as they are compared in the same currency. 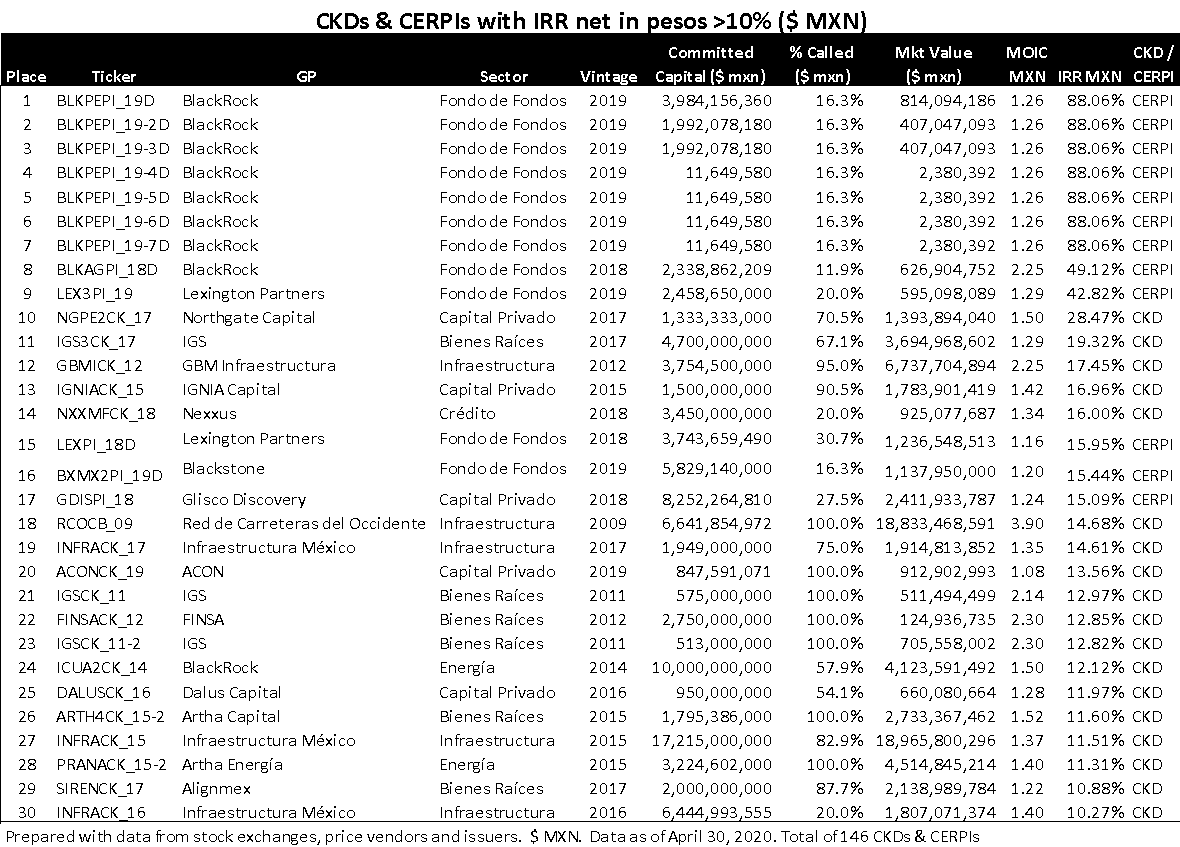 The IRR that the CKDs and CERPIs carry so far may change depending on the capital calls and distributions of each one, so they only reflect the results to date.

It is important to mention that 19 of these 107, are CERPIs who invest 90% of the resources globally and 10% invest it in Mexico. 10 CERPIs observe an IRR higher than 10% and were issued between 2018 and 2019, therefore, they have benefited from the depreciation of the peso. In total, 32 CERPIs have been placed and have a market value of $1.5 billion dollars and committed resources of $7.6 billion dollars, having only called 24% of the commitment so far. The 9 CERPIs that appear with the best IRR, for example, have only called 20% of the capital and were recently placed.

There are 114 CKDs issued as of April 2020 and have a market value of $10.5 billion, totaling $21.5 billion of committed resources and have made distributions of $4.2 billion according to their own estimates as of April 30.

When making the investments of the CERPIs globally, they will have a strong exchange component, which will force comparisons of results not only in pesos, but also in dollars, regardless of whether the exchange hedging is done.

When wanting to make comparisons of CKDs and CERPIs with respect to global private capital funds, IRRs must be calculated in dollars in order to make comparisons and this is done by converting each of the capital calls and distributions to the corresponding exchange rate at the date of each one of them.

Whether it is a TIR in pesos or in dollars, there will now be more competition for the resources of institutional investors in Mexico.

Arturo Hanono is an institutional asset manager in Mexico. He has more than 30 year's experience in the Asset Management world, of which 15 he spent as a private banker and in the last 18 years has been CIO in several Afores. He has a degree in Economics from Universidad Anáhuac (1983). For his professional thesis, he won first place in the National Stock Market Prize organized by the Mexican Stock Exchange in 1985.

You can find him at arturohanono@aol.com

In The Face Of The Pandemic And Low Oil Prices, Ckds And Cerpis Will Face Challenges And Opportunities

The CERPI Boom in Mexico Should Continue in 2019

Baruc Sáez has Been Named CEO of Itaú Corpbanca Colombia

Has Covid-19 Thrown Up Value in the Local Currency Emerging Market Debt Universe?